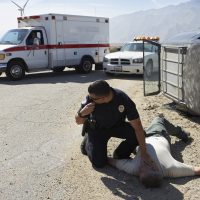 “The proof is in the pudding.” “The devil is in the details.” You know those expressions – they remind us that cases are won and lost on the details. The detail-oriented inspection of medical records is time-consuming yet rewarding in revealing what happened to a patient as a result of an injury.

Consider this fictitious example:
28-year-old Carter Kennedy was the driver of a car that was T-boned at an intersection when a driver ran the red light. He complained of immediate back and neck pain. His right leg was obviously deformed, with bone protruding through his thigh.

Suppose his attorney hired us to go through the records to determine the damages. This is what we would review:

Prior medical records: What medical problems did Carter have before this crash? Did he have any prior complaints or accidents? We determined he had no prior history of back or neck pain. He was employed as a brick layer and was able to lift , carry and push heavy loads of bricks. Carter had two children under the age of 5 and his wife was pregnant with their third child.

Emergency Medical Services: These records must be requested in addition to the acute care records. Meticulously documented and legible, they stated that Carter complained of neck and back pain at the scene. The squad noted he was seat belted at the time they first observed him. He was unable to rate his pain, as he was in a dazed state. They documented, “Possible loss of consciousness.” Because Carter was having some trouble breathing, they gave him ventilation with a bag and mask. They assumed his trouble breathing was due to fractured ribs.

Emergency Department: The EMS squad applied a hard-cervical collar and strapped Carter to a stretcher. When he arrived at the ED, the staff assessed him and put him through a series of diagnostic studies. Although he complained of neck pain, the ED physician did not order a neck CT scan, but instead ordered a head, thoracic spine, and lumbar spine CT scans, all of which were negative.

Due to the serious nature of the injuries Carter sustained, he was placed on a ventilator immediately after arrival in the ED. The emergency department nurse removed the cervical collar without an order. We pointed this out to the attorney so that he was aware that this case, which started as personal injury, had just moved into the medical malpractice realm with the ED MD and ED RN as possible defendants.

Progress Notes and Consults: The orthopedic surgeon responded to the EDMD’s call, evaluated the patient’s leg, and arranged for him to go to the OR for repair of his leg fracture.

Nursing Notes: When Carter reached the recovery room, the nurse noted he was not moving his legs. She assumed the lack of movement was due to the anesthesia and did not report this to the surgeon. However, by the time critical care nurses received the patient, and he was still not moving, they became concerned and contacted the orthopedic surgeon.

Radiology Studies: The orthopedic surgeon ordered a CT scan of the neck. It showed a burst cervical fracture that had torn the spinal cord.

Ongoing Nursing Notes: The detailed analysis of the nursing notes showed Carter expressed anguish over the prospect of never walking again. Although he was ventilator-dependent, he could make statements by mouthing words. He turned his face away from his providers and became visibly depressed. The OnPoint LNC nurse documented his mouthed statements of hopelessness, helplessness, and anger over his condition.

Therapy Notes: The physical therapist performed range of motion exercises at the bedside. Carter mouthed, “Why bother? I will never use these legs again.”

Pastoral Care: Carter’s minister visited Carter twice a week and documented, “Carter mouthed questions about why a loving God would allow this kind of thing to happen to him. Said a prayer at bedside.”

Care Manager: The care management nurse met with Carter and his wife, discussed the options for further care, and documented their anger and grief over Carter’s condition.

Rehabilitation Records: Carter went to a long-term acute care hospital as a ventilator-dependent quadriplegic, where he stayed until his wife could learn the care associated with keeping him alive at home.

Home Care Records: With the aid of his wife, her mother, and an aide, Carter spent the next two years at home until he died from an infection. In this case, we would summarize all the records to demonstrate the pain and suffering and loss of enjoyment of life Carter experienced during the two years following the crash. Most physician records and even depositions may not capture the impact of pain and suffering.

Nurses are trained to analyze, quantify, summarize and relieve pain and suffering. That is what makes us so qualified for the role of preparing reports and testifying about the damages the patient sustained.

Our OnPoint LNC nurses are skilled at this role. Contact us to discuss a pain and suffering report when you are handling a case involving significant injuries.