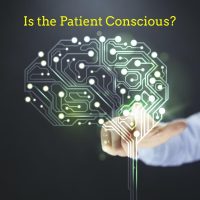 Is the Patient Conscious?

Evaluation of conscious pain and suffering depends on a careful analysis of medical records and first answering the question of whether the patient was conscious.

Terry Palache was a policeman who responded to a burglary scene. One of the suspects picked Terry up and threw him against his police car. In the scuffle, Terry landed on his head. The rescue squad records showed Terry had a LOC (loss of consciousness) at the scene and the emergency department records defined his GCS (Glasgow Coma Score) as 5.

Several medical and traumatic conditions are associated with loss of consciousness, such as a seizure, intoxication, fainting, drug overdose, shock, encephalitis (brain inflammation), carbon monoxide poisoning, stroke, concussion, insulin reaction, and anemia. In Terry’s case, the medical records showed his loss of consciousness occurred at the scene and persisted through his arrival at the emergency department.

The Glasgow Coma Scale (GCS) came into use in the 1980s. It became one of the quickest methods of determining brain function. Medical records may refer to only the total score or more typically provide the numbers for each of the three sections of the scale: what type of response is needed to have the patient open his eyes, speak, or provide a motor response. The highest possible score is 15; the lowest score is 3. A score of 8 or less indicates a severe injury.

After the acute phase, Terry was discharged to a long-term care facility with the diagnosis of locked-in syndrome. From a damages perspective, this is one of the most compelling brain injuries. Terry could not move or speak, but he had an awareness of his environment. He could move his eyes from side to side to respond to yes/no questions, but he could not initiate any conversations.

Tho Bien was riding in the back seat of a car that was rear-ended by a drunk driver. Once he moved through the acute phase and emerged from a coma, the hospital staff transferred him to a long-term care facility. Mr. Bien’s doctors diagnosed him as being in a minimally conscious state (MCS) based on the severity of his brain injury and his responses.

As a patient in a minimally conscious state, meticulous medical records analysis revealed these observations: Tho could follow simple commands, grunt yes, occasionally speak an intelligible word, and cry when he saw pictures of his young son.

Jose Hernandez was a 17-year-old high school student who went drinking with friends and then dove into a friend’s swimming pool. He hit the top of his head on the bottom of the pool and sustained a brain injury. His somewhat sober buddy pulled him out of the pool and called 911.

After his discharge from ICU to a medical-surgical floor, Jose’s neurologist diagnosed him as being in a persistent vegetative state (PVS). While Jose looked like he was awake, with his eyes open as he grunted, he did not respond to commands or track people as they moved about the room. He had permanent eyes-open unconsciousness with loss of cognitive function with no awareness of the environment.

Jose’s condition would not meet the criteria of consciousness in order to award damages for conscious pain and suffering.

The notations of nurses, neurologists, neurosurgeons, intensivists, and physiatrists are rich sources of observations about the patient’s mental state.

OnPoint LNC nurses are skilled in combing through medical records to find these observations and share their significance with our clients, and our specialized experts are familiar with brain injuries. Contact us for help with your traumatic brain injury cases.